In solidarity with Charlie Hebdo: A photo of Mohammad will have to do!

In 2006, Charlie Hebdo, the French left-wing journal, published a Manifesto against Totalitarianism that I and several others including Taslima Nasreen, Salman Rushdie and Ibn Warraq signed in support of freedom of expression during the Danish Mohammad caricature fiasco. I published the cartoons on my blog at the time too.

Today, the weekly was firebombed for publishing a special edition on the Arab Spring and calling itself Charia (Sharia) Hebdo for the occasion. Mohammad was featured as the ‘guest editor.’

In solidarity with Charlie Hebdo, Mohammad is being featured here as a guest blogger though I can’t really publish anything he’s written because it violates every anti-discrimination code in existence (to say the least!).

A photo will have to do. 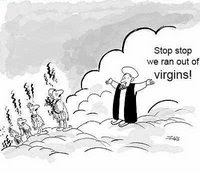 Whilst the Islamophobia watch hall monitors will start blaming Charlie Hebdo for provoking the attack, we must target the real cuprits - Islamism - and unequivocally defend free expression and speech.

As I've said before, whilst living under an Islamic inquisition, ridiculing Islam and Islamism is an historical task and duty. No ifs and buts!

See some other articles I have written on free expression and the Islamic inquisition:
The Islamic Inquisition
Free expression no ifs and buts
Islam must be criticised
Offensive shomfensive
Apologise for what: On the Mohammad caricatures
Posted by Maryam Namazie at 11:06 pm