The Council of Ex-Muslims of Britain (CEMB) will present its first all day international conference on Political Islam, Sharia Law, and Civil Society on Friday 10 October 2008. Since apostasy is punishable by death under Islamic law, the conference coincides with the International Day against the Death Penalty.

The event includes a comedy act by Nick Doody, the work of a well-known artist, Fitna Remade by Reza Moradi and Breaking the Taboo by Patty Debonitas.

In the Thursday 25 September 2008 TV International programme: Maryam Namazie talks to Fariborz Pooya on Ahmadinejad's visit to the UN; is the human rights situation in Iran better than neighbouring countries? Shealso talks to him about two questions she has received on the status of women in Iran in comparison to women in the west and on how one can be a communist in this day and age. To see it, click here.
Posted by Maryam Namazie at 8:10 pm 1 comment:

Event includes a comedy act by Nick Doody, Fitna Remade by Reza Moradi and Breaking the Taboo by Patty Debonitas.

Downloadable leaflet here.
Posted by Maryam Namazie at 10:29 am No comments:

THE FUTURE OF EUROPEAN HUMANISM
Followed by Questions from the audience

ALL HUMANISTS. SECULARISTS & FRIENDS WELCOME
Posted by Maryam Namazie at 10:31 am No comments:

Ziauddin Sardar has strange ideas about fame and fortune. If death threats and intimidation are what he is alluding to, then let him rest assured that there are better ways of getting there – most of them kowtowing to religion and Islam not the other way round.

Clearly, having an ‘ex’ in front of your name doesn’t make you one and the same with every other person or group using the prefix. There are also ex-servicemen, ex-political prisoner organisations and even Sardar’s newly founded Council of ex-Columnists and I am pretty sure they all have different aims and objectives from the Council of Ex-Muslims of Britain (CEMB). Just as the aims of the ex-Islamists are different.

As I have said in a New Statesman column a while back, publicly saying one is an ex-Muslim is important in a day and age when Islam has political power. Similarly, the right to criticise Islam – political Islam’s banner - is vital. Saying you are an ex-Christian or poking fun at Jesus and the pope today when Christianity has been reigned in by an enlightenment is not the same as doing and saying so during an inquisition.

Religion or the lack thereof is a private matter but not when you are killed for it. Then a public renunciation and criticism becomes a historical necessity and task. It is an important way of breaking taboos and paving the way for others to do so if they choose. While Sardar makes light of this, public renunciations and criticism involve serious risks for many across the world, including in Britain.

But that is not all that the CEMB stands for. It is also about challenging political Islam, and demanding the right to religion and atheism as a private affair, citizenship rights, humanity without labels, universal rights, an end to religion’s intervention in people lives, and secularism.

And the CEMB is not about creating a new ‘ex-Muslim’ identity as Sardar alludes. In fact, it is opposed to identity politics that creates imagined communities, segregates and ghettoises citizens so that the state can shrug off its responsibilities and hand over masses of people with culturally relative rights to regressive Islamic organisations and their so-called community leaders. Nor are we calling for an ‘Islamic reformation;’ if you ask me, religion can only be ‘reformed’ when and if it loses political power.

The fact that a majority of the founding CEMB members (though not existing members) are ‘Iranian exiles’ or that I am a worker-communist (err, not the Nationalist-Islamic Mujahedin-e-Khalq but I will leave the Iranian history lesson for another time) is beside the point. Suffice it to say that this and many other battles led by people like myself, including against Sharia law in Canada, for refugee and women’s rights, for a third camp against US militarism and Islamic terrorism, for secularism, against child veiling and honour killings and so on are a reflection of the specific conditions in Iran and the left-leaning and secular battle raging there against an Islamic regime.

Finally, in the end, society measures organisations according to their aims and actions and their relevance to people’s lives. Undoubtedly, it is our unequivocal defence of human values and 21st century humanity that are the reasons behind our resounding success not the prefix in our name or any ‘insider information.’

You can read the CEMB’s manifesto and find out more information about the organisation and an international conference it is organising in London on October 10 entitled ‘Political Islam, Sharia Law and Civil Society’ on our website.
Posted by Maryam Namazie at 4:51 am 1 comment:

Hamid Shemshad was not deported, thanks to your efforts

Thank you for all your effort in defending Hamid Shemshad.

Peter Edelmann, Hamid's lawyer informed me that "removal section" of the Immigration office has advised him that they are not going to deport Hamid on Sunday, September 7th as it was set. They are holding it until the Immigration Canada look into his case. They also suggested that we do not make "too much noise in the media", which we already have done.

So I would like to share this little success with you and invite you to remain alert and keep the pressure on the Immigration Canada and the minister.

What is the difference between Islam/political Islam and Muslims? Reza Moradi responds to that and other questions on his film, Fitna Remade. Can one oppose political Islam and US Militarism at the same time? Patty Debonitas responds on the Third Camp. Maryam Namazie also gives an update on the fight back against the Islamic regime of Iran’s misogynist Family Protection Bill, The pending execution of Farzad Kamangar in Iran and the imminent deportation of Hamid Shemshad from Canada.

To view it, click here.
Posted by Maryam Namazie at 8:09 am No comments:

The only difference is this piece of paper 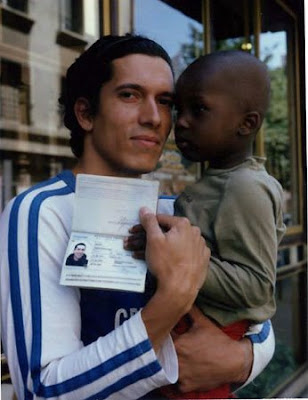 France's undocumented immigrants live in constant fear of deportation because they do not have the correct papers.

French photographer, Fabien Breuvart, has put together a series of images of anonymous 'sans-papiers', posing with sympathetic French citizens displaying their ID, in a powerful display of solidarity.

The point of the photos is of course that the only difference between the two people photographed is merely a piece of paper.

You can see more photos and information in the Guardian, here.
Posted by Maryam Namazie at 8:23 am 1 comment:

In commemoration of our most beloved 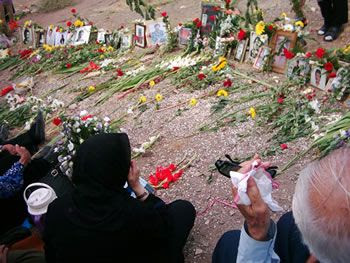 Every year relatives and friends of those executed during the Islamic regime of Iran's mass executions of the summer of 1988 come together in Khavaran cemetery in the southeastern part of Tehran to commemorate their beloved. To us Khavaran is called the "Flower Garden," but to the regime, which has dumped the bodies of thousands of Marxists, leftists, "anti-revolutionaries" and "non-believers," it is the 'place of the damned.' Thousands were executed and dumped in mass graves after a brief informal questioning by three men who became known as the 'Death Commission.'

On August 29, the 20 anniversary of the slaughter, the Islamic regime of Iran's security forces blocked access to Khavaran, attacked the crowd, injuring some and arresting others. Nonetheless, the crowd filled Khavaran road leading to the cemetery with flowers and went on to commemorate their loved ones in Section 33 of Beheshte Zahra cemetery where those executed by the monarchy have been buried.

Khavaran is a reminder of the crimes against humanity of the Islamic regime as well as the resolve of the people of Iran in getting rid of this regime.
Posted by Maryam Namazie at 11:23 am No comments:

Save Hamid Shemshad from Deportation to Iran

Hamid Shemshad is scheduled to be deported to Iran next Sunday, September 7 by Canadian immigration. He is a well-known political activist and a member of an Iranian political and opposition party. His life will be in danger if he is returned. His deportation must be cancelled and he must be recognised as a refugee by Canadian Immigration.

The International Federation of Iranian Refugees (IFIR) calls on concerned individuals and organizations to intervene and put pressure on the Canadian government to cancel his deportation immediately and grant him protection.

His supporters have set up a website for people to sign a peition in his defence. You can also send protest letters to the minister of citizenship and immigration in support of Hamid (a sample can be found below) with copies to IFIR and his lawyer.

To the Honorable Diane Finley

I am / My Organization is / writing to express our strongest concern over the fate of Hamid Shemshad, an Iranian asylum seeker in Canada.

He is in danger of deportation to Iran from Canada where he will face persecution as a political opponent of the Islamic regime in Iran.

I am / We are awaiting your immediate intervention in this life-threatening situation.

Needless to say, the Canadian government will be held accountable for his life and freedom.

Please make sure a copy of your letter is forwarded to his lawyer, Peter Edelmann.
Posted by Maryam Namazie at 9:10 am 1 comment: