Women and people in Iran resisting the veil This picture is representative of the Islamic regime of Iran's treatment of women. She was beaten in this way for filming the regime's thugs harrassing and manhandling women who were 'improperly veiled.'

An Iranian women's organisation quoted a cab driver as saying: 'In the morning, the police tried to drag a girl into their vehicle for improper veiling, but her cries enraged passersby'. The organisation also mentioned a shopkeeper in 7-Tir square in Tehran who said: 'The secuity agents were harshly questioning three women aged 25- 30 so they reacted. A female agent started pulling a girl's hand to get her in their vehicle but she resisted. Then, a male security agent attacked the girl. That was when passersby intervened. The girls escaped via a passing car without any veils and torn clothingas a result of the altercation.'

On 20 May, when this happened, later in the evening nearly two thousand people gathered in 7-Tir square to protest.

Here are some more pictures of the regime's thugs harrassing women for 'improper veiling'. 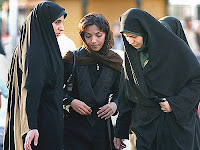 Also, as I've mentioned before, removing the veil is a form of protest in Iran.
To see one woman doing so, click here.

Boys and men by the way are also rounded up for not being dressed modestly.
No matter what the regime does, though, women and men continue to resist and demand to live lives worthy of the 21 century.
Posted by Maryam Namazie at 7:05 pm

Only a socialist, secular Iran, run by workers, can guarantee basic democratic rights, as to not wear a veil.

Periyar Ramasamy said that person who believes religion in modern age is a barbarian. There are many modern age barbarians in this so called civilised world.

What utter rubbish! The Islamic Republic is a well ordered moralistic society. The picture of the young lady in the car was a prearranged publicity stunt using a red coloured substance that was on her possession, which she used to dramatise her protest to great effect.

"What utter rubbish! The Islamic Republic is a well ordered moralistic society. The picture of the young lady in the car was a prearranged publicity stunt using a red coloured substance that was on her possession, which she used to dramatise her protest to great effect."

This is terrible and lives in Iran are just a massive abuse of human rights...

Stupid government should burn to the ground - then we can build a new one, based on DEMOCRACY and EQUAL,CIVL and HUMAN RIGHTS.