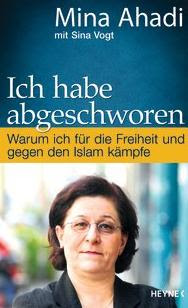 No Hejab No. 1 interview with Sina Voget, co-author of Mina Ahadi’s autobiography which has been published in Germany recently. Sina Voget has been a freelance journalist for more than 10 years. Her work is mostly about human rights and health politics. In 2000 she was spokeswoman of Amnesty International Germany. Since September 2007 she has been spokeswoman of the University Hospital in Cologne, Germany.

What made you decide to write Mina Ahadi’s story?

Sina Voget: I first met Mina Ahadi in the late 90s when I did an interview with her for German TV about her fight for women’s rights under Islam. Then I met her again in 2006 at International Women’s Day in March where she had organised a campaign against so called “honour killings” with Ayaan Hirsi Ali. I wrote an article about Mina Ahadi for the German newspaper Taz after that and asked her if she ever had thought about writing a book about her life. Her power and spirit and her life-story just seemed to be something that should be written. So we met for the first interview. It took another year and needed the campaign of the Ex-Muslims until an editor was found to publish the book.

Based on Mina’s story, what do you think of the women’s movement for equality in Iran?

Sina Voget: I strongly admire the power of some Iranian women, in exile and even in Iran who fight for their rights and against sexual apartheid. After listening to Mina’s story I strongly believe that it needs a secular state in Iran to fight the dictatorship of the religious regime. I came to the conclusion that in Germany a stronger division between state and (Christian) church would be better for equality as well.

Sina Voget: The great feminist activists seem to be quiet on some very important matters regarding women’s lives in Iran and some Islam stricken countries. Matters such as compulsory Hejab, stoning and honour killing.

When I became a feminist in the 80s violence against women was a big issue. But it is no longer a big issue when it happens in “different cultures”. That shows the problem of wrongly understood “tolerance” even within the women’s rights movement. But there are always some German women, who don’t hesitate to talk about it, and some Turkish-German women who talk about violence against women in their own community. All German women should support that more, as well as your fight against sexual apartheid.

Do you think writing Mina’s life story might help strengthen a solidarity movement with Iranian women’s struggle against Sexual Apartheid?

Sina Voget: If her story doesn’t help to form a solidarity movement I have no idea what else could do so!
Posted by Maryam Namazie at 12:49 am

Thank you for bringing this book to our attention, and for speaking up for human rights for women everywhere.

Karen Tintori, author
Unto the Daughters: The Legacy of an Honor Killing in a Sicilian-American Family
www.karentintori.com