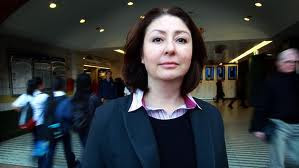 Maryam Namazie’s Australian tour in the last week of August 2011 was a huge success, attracting a high media profile and hundreds who attended her various speaking engagements, which included a fundraising dinner in Sydney, a talk at the Wheeler Centre organised by Melbourne PEN and WISA, a talk at Melbourne Free University's open discussion space, a talk at University of Western Sydney Open forum with award winning author Hanifa Deen providing commentary, and a talk organised by the NSW Humanists.
During her week-long speaking tour, Maryam highlighted the many parallels between Britain and Australia, drawing attention to the unholy alliance between the Islamists and the pro-Islamist Left that refuse to condemn sharia in the false belief that to do so would be “racist”. She insisted that in fact, sharia’s advancement restricts the rights and freedoms of Muslims first and foremost, and that relegating Muslims to a separate legal system that restricts the rights of women and children in particular is the real act of racism.

“Just because people were born into Muslim families, it doesn’t mean they don’t deserve the same rights and freedoms as everyone else,” Maryam said.

While battling the skewed perspectives of the Islamists and their apologists, Maryam also stressed the urgent need to oppose the far-Right, including the Australian Defence League and the Stop Islamisation movement, which feigned to oppose Sharia law in order to attack Muslims and immigrants. She called for an unequivocal defence of asylum seekers and refugees, many of whom have fled Islamism and Sharia law.

Maryam’s visit coincided with the publication of research by academics who found that legal pluralism “abounds” in Australia, creating a shadow legal system that endorses polygamous and underage marriages in which women have lesser entitlements to divorce and child custody.

During her visit, Maryam was interviewed by a number of media outlets. Some of the coverage can be found below:

British experiment a warning on Sharia law by Chris Merritt, The Australian, 26 August 2011.

ABC Radio National's Late Night Live with Phillip Adams interviewing Maryam Namazie along with Director of DV8 physical theatre Lloyd Newson whose latest work, Can We Talk About This? deals with freedom of speech, censorship and Islam. The production premiered in August 2011 at Sydney Opera House, and will be followed by an international tour. This documentary-style dance-theatre production is based on interviews, thoughts and speeches of individuals such as Maryam Namazie, the director of ‘One Law for All,’ which fights for the rights of women, and against Sharia courts and Sharia law being introduced in Britain, 22 August 2011.

Links to interviews by Ida Lichter, author of Muslim Women Reformers, Rachael Kohn of ABC Radio National’s The Spirit of Things and with Virginia Hausegger, ABC News 24's One Plus One program will follow.

For more information on Maryam Namazie’s Australia tour, please contact tour organiser and One Law for All Australia contact person Gaby Grammeno, at ggrammeno@bigpond.com.
Posted by Maryam Namazie at 6:49 pm

Well Done Maryam. There is a great social change going on right now and raising our banner at this point has special importance. people are longing to see it. Try to translate this activity into French (and Arabic of course) as women and secularists of Tunisia,Egypt, Syria, Libya need to know. All the Best.