An open letter from Sami Ahmed about her mum's rights violation 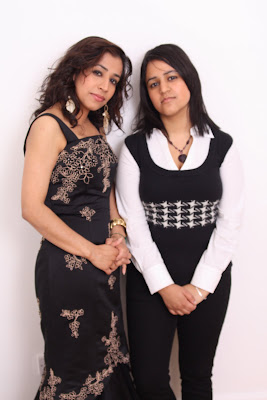 My name is Sami Ahmed [on the right in the photo by Jo D. Jonz with mum Saira, left]and I am 19 years old; I am the daughter of author Saira Ali Ahmed. 20 years ago a serious violation of my mother’s human rights had occurred in Bangladesh, and I am seeking support from you to bring the Bangladesh government to justice.

When my mother was 13 or 14 years old her child marriage was arranged in Bangladesh to Muzibur “nunu” Rehman, a British-Bangladeshi man in his mid-20s. Once she came to this country she fell pregnant, and on the day I was born, she found out through Social Services that he was a paedophile and manic depressive. Since then, she had lived in various refuges and government given housing, and now we are in a much better place in our lives. She has not however, been able to return to her home country Bangladesh, since her ex-husband’s family, who have strong political connections, have threatened to take me away from my mother. My maternal grandfather had died over ten years ago, and we still have not been to his grave, nor have I ever met my grandmother. My mum has never exercised her right at all to receiving family support or property from her ex-husband, in accordance with UK Law and under the Muslim marriage law of ‘Den Mohor’.

I feel it is important for an individual to know their rights, and that it is my mother’s human right to be given an apology from the Bangladesh government, on two accounts. Firstly, they had failed to protect her as a child and secondly, her ex-husband’s brother was the Bangladesh Nationalist Party’s Secretary in the town she lived in, and lied about his brother’s true condition without legal charges being pressed against him.

I have researched below the articles from the Universal Bill of Human Rights that we believe the Bangladesh government have violated, since they are a member of the United Nations:

• Article 1: “All human beings are born free and equal in dignity and rights. They are endowed with reason and conscience and should act towards one another in a spirit of brotherhood.” My mother suffered a great deal of humiliation in the undignified selling of herself in marriage.
• Article 5: “No one shall be subjected to torture or to cruel, inhuman or degrading treatment or punishment.” The nature of my mother’s child marriage to a paedophile was cruel, inhuman and degrading.
• Article 13, part II: “Everyone has the right to leave any country, including his own, and to return to his country.” My mother has not been able to return to Bangladesh, from crippling fear of me being taken away from her.
• Article 16, part II: “Marriage shall be entered into only with the free and full consent of the intending spouses.” My mother’s marriage was arranged, and forced upon her. Her ‘consent’ was a result of pressure and oppression; a definition that does not coincide with Bangladesh’s commitment to the Bill of Rights.
• And finally, Article 8 states “Everyone has the right to an effective remedy by the competent national tribunals for acts violating the fundamental rights granted him by the constitution or by law.” For the Bangladesh government to realize their failures to my mother and other girls, would be an ‘effective remedy.’

Despite the government having failed to provide an effective remedy, my mum has taken steps herself; she has published her autobiography “Breaking Free” and rights have been secured for this to be developed as a feature film.

We only have one world; reconciliation and responsibility ought to play a part of that world. My mum has reconciled relations with her family as much as can be. However, the Bangladesh government have failed the UN and my mum in their keeping of the Bill of Rights. My mum was kept prisoner in Bangladesh and was only really set free with my birth, and with the support of the Social Services in England. It is time for the Bangladesh government to do the same.

You can support Sami by signing her petition here.
Posted by Maryam Namazie at 10:43 am