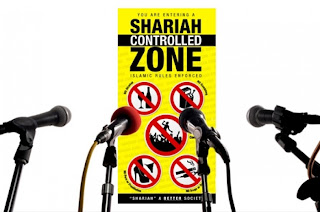 Recently, the Islamist group Muslims Against Crusades began what it called a campaign for “Islamic emirates” throughout Britain by putting up posters declaring areas of east London as “sharia controlled zones”. The posters stated that alcohol, gambling, and music were banned and the group said it was willing to patrol east London enforcing sharia. One Law for All maintains that Muslims Against Crusades is a far-Right group that intends to stir up mistrust and division and impose its medieval rules on the public. Sharia law is the demand of Islamists like Muslims Against Crusades to limit rights and freedoms and must not be tolerated. To oppose Sharia law is a defence of the rights of all citizens, including Muslims.

Clearly, Muslim Against Crusades is the mirror image of other far-Right groups and campaigns. They do not tolerate difference or dissent, are misogynist and wish to deny rights to women, and are homophobic – often murderously so.

Whilst Muslims Against Crusades argue that they will solve social problems in these zones, in reality, they are offering a discriminatory, brutal and oppressive system with barbaric punishments and interference in people’s private lives which will exacerbate problems. Rather, people need education, equality and citizenship rights amongst others.

Muslims against Crusades say women need their “protection”. On the contrary, we need protection from misogynist and religious laws and this protection will be supplied by a just, equal, and secular legal and political system not Sharia. The rape of women in countries governed by sharia often ends in the punishment of the raped woman, and rape and sexual abuse is widespread.

Sharia is not the answer. We must - and will - maintain our campaign for secularism, human rights, justice and equality until there is no Sharia and religious laws here in Britain or anywhere.
Posted by Maryam Namazie at 8:45 pm

The only problem I see you having is preventing the Catholics from using this issue to swing things towards a Christian version of "Sharia"... since Muslim religious law is just a tweaked version of Old Testament law.

I read about these so-called Sharia Zones and was hesitant in believing that local councils and the government as a whole would allow this.

From what I heard the police and councils were quite swift in removing the fly posters and stating that they were illegal.

I hope that this was just a small group of nutters receiving publicity well beyond their due by that paragon of objective reporting, The Daily Mail.

This would be frightening. People's rights would be seriously violated.

How many 'small groups of nutters' does there have to be before we see realise that this is a bigger issue?

I just want to clarify some of the problems that has been reported in Tower Hamlets in the East End.

In recent years, the number of crimes carried out by Islamists in that area has sky-rocketed.

That area alone has seen a huge surge in violent homophobic attacks and attacks on smokers outside pubs.

The east London mosque has played host to anti-gay and extremist speakers even going so far as hosting a 'spot the fag' competition.

Also, many women - Muslim and non-Muslim alike - have been hissed and spat at by Islamists, especially during voting time where these women came out to exercise that right.

The introduction of the now 'no go' areas is just another in a long wave of Islamist activity in that area.

This page from Pink News has more: http://www.pinknews.co.uk/?s=tower+hamlets

Of course, it doesn't help matters when the mayor himself is an associate of the far right 'Islamic Forum of Europe':