No to War, No to Islamic Republic, Long Live Socialism!

May 1st is the solidarity day of the working class in order to change the upside down capitalist world. At present, when the “New World Order” is facing a dead end, in a world where the lives and rights of people are smashed by the war for power between political Islamist terrorism and the state terrorism of the West, May Day should be the day of solidarity of the workers and libertarian humans against these two reactionary poles and towards forming a better world.

In Iran, where political Islam is in power, the working class can play a key role against the war of the ter 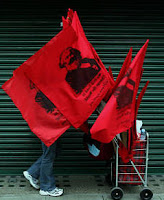 There is an immense revolutionary movement against the Islamic Republic. Working class is the backbone of this movement and due to the active presence of the worker-communist movement and its party the socialistic and libertarian demands dominate this movement. The continuous workers’ strikes, the nationwide strike of school teachers that has mobilized the whole society, marking the student movement with the slogan “Socialism or Barbarism”, proposition of the most radical demands on March 8th, growth of children’s rights movement and the movement for abolition of the death penalty with leftist slogans and demands, chanting the Internationale anthem in meetings; all these confirm the key role that the working class and its socialism plays in the existing social situation in Iran. The working class in Iran can and should overthrow the Islamic Republic under the banner of its party and as the pioneer of the people. It should form the socialist republic and save not only itself but also the people of Iran and of the world from the horrific fate that the dead end of bourgeoisie and its wars can create. May Day of this year, far and most, should be the reflection of the will and intention of the workers towards changing the world.

“No to War, No to Islamic Republic, Long Live Socialist Republic” expresses the direction of this May Day. However, together with this, demands such as higher wages that can immediately unite the largest factions of the working class, teachers and the workers in the service sector should be emphasized. Unconditional release of all political prisoners is an important demand of workers and of all people and as always it should be underlined in this May Day. Other important demands such as freedom of organization and strike, freedom of expression, the unconditional equality of rights of women and men, abolition of sexual apartheid, abolition of death penalty, separation of religion from the state and education have always been addressed in May Day resolutions and they are of more importance this year.

This May Day independent meetings should be made in larger scales than ever before. May Day should be the show case of the strength of the working class and of the lines of libertarianism and equalitarianism. Because of the criticality of the situation, as we approach the May Day, the Islamic regime is agitated like never before. Arresting the workers’ activists, attacking the students, aggression against the women that object Islamic veiling, attacks against the immigrant workers from Afghanistan, and attacking the school teachers and their activists that are leading a strong movement; all these are parts of one policy and reflect regime’s fear from the revolutionary overthrowing movement and the danger this May Day has for it. Different sections of the working class should appear in unified and powerful lines this May Day. They should emphasize the importance of solidarity between the workers and the teachers and should object in unison trade unionist tendencies that divide the struggle of the working class. School teachers should consider themselves the hosts of the May Day and should struggle against the tendency that separate teachers from other sections of the working class. A vivid, crowded, unified, radical, and socialist May Day, today more than ever, is the consequence of the solidarity between different parts of the society and unifying them under the socialist flag of the working class.

Worker-communist Party of Iran calls upon all libertarian and equalitarian people, workers, students, women and all those that have been fed up with the Islamic Republic and the reactionary and anti-human capitalist order to widely participate in May Day celebrations. Strong picket lines of May Day are the powerful lines of all people to emancipate from the Islamic Republic and to claim their own destiny in order to actualize freedom and equality.

You are lucky your comrades have voice over the slogans, and direction of the march.

In Minneapolis we are a new group. The Maoists are strong here, and we have to fight them, or they'll turn the demonstration into openly reformist.