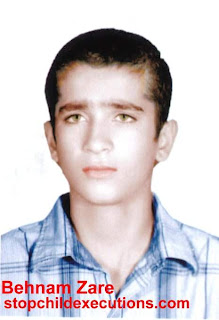 According to Amnesty International, Behnam Zare's execution order has been sent to Adelabad prison, in the south-western city of Shiraz, where he has been imprisoned since his arrest. prison where he is held. He is facing execution within 72 hours.

He was convicted of a murder committed when he was 15 years old.

The murder reportedly took place on 21 April 2005, when Behnam swung a knife during an argument with a man named Mehrdad, wounding him in the neck. Mehrdad later died in hospital. Behnam was detained on 13 November 2005; Branch 5 of Fars Criminal Court sentenced him to qesas (retribution) for premeditated murder.

Under Article 206 (b) of Iran’s Criminal Code, murder is classed as premeditated “in cases where the murderer intentionally makes an action which is inherently lethal, even if [the murderer] does not intend to kill the person.”

The case went on appeal before Branch 33 of the Supreme Court where the sentence was upheld, and it has now been passed to the Office for Implementation of Sentences.

Call for a end to all executions in Iran, and particularly child executions.

The death penalty is state-sponsored murder and must be opposed in all instances but particularly when it comes to a child or child offender.


You can write to: