London protest calls for the release of Parwiz Kambakhsh 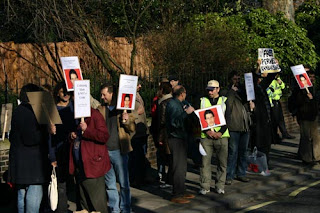 On Friday 8 February 2008, protestors picketed the Afghanistan Embassy in London to call for the immediate release of Parwiz Kambakhsh. The protest, organised by the Iranian Secular Society, was in response to the arrest, jailing and death sentence imposed on Parwiz Kambakhsh for downloading and discussing the plight of women under Islam.

Officials of the Afghan embassy met outside with protestors to state that the death sentence against Kambakhsh will be commuted. Protestors insisted upon his immediate released saying he had committed no crime. They also expressed their concern regarding Kambakhsh’s physical and emotional safety as he has been left at the mercy of and beaten by other common prisoners, including Taliban prisoners, who had been told by prison guards that he has ‘blasphemed’ against Islam.

The Iranian Secular Society will continue to campaign for Kambakhsh’s release and calls on groups and individuals to keep the pressure on the Afghan and British governments.

To see more pictures from the demo, click here.
Posted by Maryam Namazie at 6:35 pm