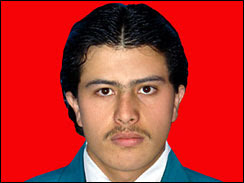 Since October 2007, Parwiz Kambakhsh, a 23 year old Afghan journalist, has been in prison in Balkh province, Northern Afghanistan and sentenced to execution for blasphemy by a local Sharia court in Mazar-e-Sharif. His ‘crime’ was distributing articles downloaded from the internet that questioned the condition of women under Islam. The Afghan government has supported the Islamic court’s ruling.

On Thursday, January 31, 200 people demonstrated for his freedom in Kabul. International public opinion and pressure must join them to save his life.

The Iranian Secular Society calls upon groups and individuals to join the protest against this barbaric sentence and demand the immediate and unconditional release of Kambakhsh, including by joining the London protest, organising protests in various cities, writing letters of protest and more.

Muhammad created Islam as a criminal Mafia enterprise to make war against infidels, murder those infidels who refused to convert to Islam or pay a devastating submission tax (jizya) (criminal extortion) enslave their women and children, rape and breed them like cattle, loot their property and share 80% of the looted proceeds with the criminal Muslim jihadists with 20% going to Muhammad. If no fighting was involved then 100% of the proceeds went to Muhammad.

Islam is on a holy mission decreed by Allah to conquer the world by whatever means necessary and make Islam- the only religion and Muslims the only people. This means the extermination or conversion by force or the threat of death or slavery of 5 billion people. The Koran is a blueprint for mass murder and the creation of a total totalitarian state with all human beings living in total submission to the will of Allah as expressed by the ETERNAL LAWS OF ALLAH (the ANTI GOD) in the Koran.

Murdering infidels, stealing their property, raping their women and little girls, selling into slavery the women and little girls the Muslim men did not want to keep as sex slaves, breeding them for profit and the imposition of the devastating jizya (submission) tax on the conquered peoples funded the Islamic armies allowing them to conquer more infidel nations, taking more slaves, more jizya, more sex slaves – a vicious deadly circle. These evil criminal acts are Islam - murder, looting, rape, and slavery.

Muhammad invented Islam and Allah (the Anti God) and created fake revelations from this bogus Allah and presented them as the ETERNAL LAWS OF GOD. This ANTI GOD - Allah was presented as the same God worshipped by Christians and Jews. This allowed Muhammad to morally justify criminal acts as holy duties sanctioned by God to be rewarded on earth by unlimited wealth of booty, unlimited source of sex provided by sex slaves and future wealth by breeding and selling slaves. And for those Muslims who splayed and were slain in carrying out these evil criminal acts of the ANTI GOD were guaranteed accession to a Paradise of big breasted, lustrous eyed virgins who re – generate as virgins after each sex act to be molested by these righteous killers for all eternity.

When President Bush stood at the podium in Dubai and declared that Islam was a noble religion that had been hijacked by Islamic terrorists, he was a dimini of the first order.

The Saudis have murdered at least 2000 US service men in Iraq. The Saudi government has been behind most of the suicide bombers in Iraq in a desperate attempt to overthrow the Shiites.

The reality is that Islam is not a religion but an evil ideology.

Terms like Islamic terrorists, Islamo - Fascists gives tremendous creditability to Islam. They perpetuate the myth that Islam is a wonderful religion of peace and love that has been hi – jacked and perverted by a few bad apples of evil Islamo – Fascists, Islamic militants, Islamic Fundamentalists, jihadists, Wahhabism, radical Islam, political Islam, Islamists etc

The Koran is a book of war. This war is permanent until ALL infidels have been converted to Islam, agree to pay a submission tax or have been murdered.

I'm sure a coalition can be built around the issue.

Karzai could stop this madness in one minute if he wanted.