For all our beloved: Protests to mark 20 June

20 June means a lot to those of us involved in the fight to get rid of the Islamic Republic of Iran.

It marks 20 June 1980 'one of the greatest crimes of the 20th Century, comparable to Nazi Germany, the genocide in Indonesia and Rwanda, and much more brutal than what took place in Chile. It is one of the most important catastrophes and human tragedies of the 20th Century. They attacked, suppressed, killed and buried in unmarked graves, innumerable people. They massacred many of the best, the most passionate and progressive people in order to remain in power.' Read more of Mansoor Hekmat's interview about it here.

This is for her and the innumerable not with us today: 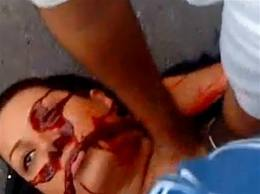 I have struggled on how best to commemorate our belovedNeda Agha-Soltan but it is hard to find the words that can do her justice. Neda's murder has affected us all so deeply.
People have sung songs for her and erected monuments in her name. And the cries of ‘We are all Neda’ have been heard in every corner of the globe.

Part of it has to do with the fact that we have been there when her life was ended on 20 June 2009 - when she was shot in cold blood in broad daylight by the Islamic regime of Iran’s baseeji on the streets of Tehran. We have seen one video clip of her walking with her music teacher amongst the crowd of protestors and then another where we see her falling down slowly being held by her teacher and another. Whilst her eyes look straight into the mobile phone filming her last moments you first hear her music teacher calmly saying ‘Neda don’t be afraid;’ and then screams of ‘stay with us’ whilst blood pours from her mouth and nose. And then she is gone. (Heartwrenching film here.)

How can anyone not be moved and outraged?
Of course she is not the only victim of this regime. Tens have been killed during the June protests alone, thousands arrested and tortured with many still languishing in prison. Some have even received death sentences for taking part in the June protests. And we cannot forget the 100,000 who have been slaughtered over the past thirty years very often behind closed doors and under cover of darkness and buried in mass graves. The only difference with this state sponsored murder was that it happened before our very eyes.

Neda’s death removed any masks the Islamic regime of Iran may have still had and left only its barbarity and brutality naked and bare for all to see. Nothing it could say and do would change this reality. It blamed the CIA, the BBC, the doctor Arash Hejazi who stepped in to help her, and even blamed Neda herself for faking her death only to be killed later by her collaborators (according to Press TV) but to no avail. This time the world had seen it for themselves.

And as a result none of us will ever be the same.

There are times in human history when individuals become symbols and, today, Neda has become ours.

She symbolises all the loved ones we have lost and are losing to this indiscriminate killing machine. She symbolises the fact that it is a crime to be a woman in Iran – and as she has said herself ‘condemned to live without being able to breathe,’ in a country where ‘women cannot live like human beings.’
But what makes her a symbol more than anything else is that despite thirty years of repression and medievalism, despite the fact that Neda was born under Islamic rule, she represents that courageous refusal to kneel.

Her mother pleaded with her not to go to the protest that day. She had no choice. She said: ‘I have to go. If I don’t go out, who will?’

Yes, there are millions like her living under sexual apartheid, veiled, gagged, bound, burnt, hacked to death, hung, decapitated, stoned to death... Many of them are right here in Europe where the rise of Islamism along with its threats and intimidations, Sharia courts, burkas and madrasas further deny rights and freedoms and restrict secular spaces.

But Neda is a symbol first and foremost because she personifies the millions refusing and resisting day in and day out and demanding a life worthy of 21st century humanity.

In a world where cultural relativism is the order of the day and all we hear over and over - as if a sermon over the corpses of innumerable women - is that it is 'their culture and religion,' respect it; tolerate it; do not offend it, Neda clearly shows that her culture and that of millions who poured out on to the streets of Iran in protest is antithetical to the Islamic regime of Iran’s brutal culture. It is opposed it; it wants to breathe.

It is her life and resistance, her demand for freedom against all odds, her desire to live like a human being that has made her our symbol – the symbol of an unfolding revolution in Iran.

But she is even more. We remember Neda when we battle for equal right here in Europe, when we fight honour killings, child veiling, Sharia law courts, the burqa and Islamic schools here or wherever else we happen to live and whether we are Iranian or not. Neda's murder by the Islamic regime in Iran and the rise of Islamism globally are intrinsically linked. Clearly, the fight for a different and secular society in Iran is intrinsically linked to the fight for a different and secular one right there in Europe. And Neda is its symbol.

How can we honour Neda best?

By finishing what she and many others went out to do that day. By creating a society and world where people can breathe. And that can only really happen with the end to the Islamic Republic of Iran and Islamism as well as religion’s adverse role in the public space, including the Vatican’s.

Throughout history, reaction has always been pushed back by standing up to it and confronting it head on.

The 21st Century must be the century that rids itself of political religion.

This has begun in Iran and Neda is its banner...

Here are a list of cities where protests will be taking place; Join them!
Posted by Maryam Namazie at 2:00 am

Iran reminds us of the importance of the Constitution a society creates when it decides on "Democracy." In Iran the people "chose" (had chosen for them) a Constitution that specifically ensured that "Democracy" would be no more than word - empty of content or meaning.

The three religions of Abraham believe that the creator of the Universe is - by his own holy (sic) books - a self-confessed, multiple-occasion, mass-murdering maniac. That is not the worse; in addition to wanting to spend eternity in his "loving" embrace they also all await for him to return and slay their enemies - namely the other two of the religions.

Religion, got to love it, eh?