June 20: Global Day for Freedom of Political Prisoners in Iran 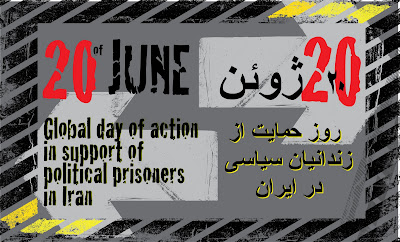 June 20th is the anniversary of the holocaust of thousands and thousands dissidents in Iran by the Islamic regime (1981). These days are as well the anniversary of the people’s uprising against the regime (2009), under which Neda, Sohrab and the others were steeped in blood.
Right now, thousands of political prisoners are in clutches of the Islamic rags and subjected to contempt, torture and execution. To the call of the Campaign for Freedom of Political Prisoners in Iran, protest meetings are going to be held in over 40 cities around the world by human rights organisations and political parties on June 20th.

In support of this call, the International Committee against Execution and the International Committee against Stoning, in turn, call upon all those, who in defence of Sakineh Ashtiani, went across the world to the streets and protested against the Islamic regime, all those who advocate human rights and all freedom-loving people, to organise protest meetings in front of the embassies and consulates of the regime or in city centres.

Let’s take to the streets on June 20th and raise our voices against capital punishment and stoning to death. Let’s hand in hand give this action still more global extent. Let’s with might defend political prisoners in Iran and demand immediate freedom of them and an end to torture, stoning to death and execution.

Here are a list of cities where the protests are taking place.
Posted by Maryam Namazie at 2:30 am

Can't get there for health reasons but wish you the best of luck.